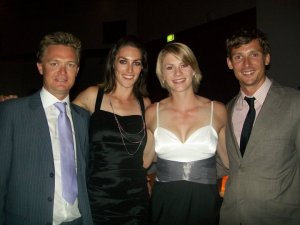 National Champions and ACTAS scholarship holders Brendan Cole, Melissa Breen and Lauren Boden have scooped the awards at the Athletics ACT end of year presentation night. This was symbolised with them taking numbers 1, 2 and 3 in the prestigious laurel wreath number allocation ranking athletes according to performance in the 2009/2010 season.

It was Brendan Cole who took the number 1 position over his training partners. Brendan had a fantastic year that included a top 16 finish at the 2009 World Championships, Gold in the 4 x 400m at the World University Games and also a 5th place in the final of the 400m Hurdles at the same championships. Domestically Cole was clearly the number 1 male 400m Hurdler culminating in his victory at the National Championships.

The number 2 wreath was given to Lauren Boden who was one of the stars of the domestic season this year. Lauren ran numerous personal bests in 200m, 400m and 400m Hurdles and took victory at the Canberra, Hobart and Sydney meets before her emphatic victory at the National Championships securing automatic selection for the Commonwealth Games. Lauren also finished 5th in the 400m Hurdles at the World University Games and represented Australia in the Ashes Test match in the 100m Hurdles and 150m. More recently Lauren made another break through when winning twice in Japan and running back to back personal bests. Her final victory at the Osaka Grand Prix saw her run 55.25 which moves her to number 3 all time on the Australian 400m Hurdles list behind Debbie Flintoff King and Jana Rawlinson.

Amazingly despite a season to remember Melissa Breen had to settle for the number 3 wreath number behind her training partners. Melissa’s season encompassed the full gamete of emotion and has shown the athletics fraternity that at still only 19 years of age she has quickly matured into a world class sprinter and fantastic role model to up and coming junior athletes. Melissa was a finalist in the 100m at the 2009 World University Games and also represented Australia at the Ashes Test series in the 150m. The selection and then subsequent withdrawal from the team as a result of not running the village entry for the 2009 World Championships has been well documented but it is the way that Melissa has dealt with this that should be admired and applauded. The domestic season has displayed a real consistency of high class performance including 7 consecutive final races better than the Commonwealth Games B standard of 11.50. Her time of 11.34 in March was an A standard and meant that her victory at the National Championships in Perth this year secured an automatic selection for the 2010 Commonwealth Games.

Coach Matt Beckenham was also announced as the Coach of the Year. This is the 4th year in a row he has won this award and recognised the results he has had with Brendan, Lauren, Melissa. To add to this Matt also

For exclusive footage of award speeches please go to https://mattybdept.com/video/athletics-act-award-night-speeches/

Get round this bloke if you are looking for some physio treatment. Mention @mattybdept when you book your next appointment with Rob at @upnrunningphysio
Get in there tiger 🐯