The MattyB DEPT stable is gearing up for a big summer ahead starting off with the Tasmanian Athletic League (TAL) events over the Christmas/New Year period.

After some great success last year highlighted with Brendan Cole’s very close victory in the Burnie Gift the crew, including some new faces, are keen to make their way down to the apple isle.

This year the following athletes will be attending the carnival:

Also on the track today was the very pleasing sight of Brandan Galic running some reps with new recruit Alex Carew.

Squad captain Brendan Cole is also back into full training and today received the coveted “Spew Jersey” after serving up his lunch to the grass after running some solid 200m reps. 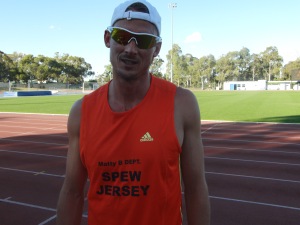 Get round this bloke if you are looking for some physio treatment. Mention @mattybdept when you book your next appointment with Rob at @upnrunningphysio
Get in there tiger 🐯