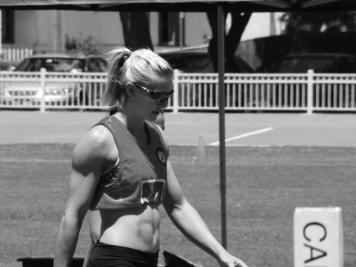 21 year old Melissa Breen has finished off a busy 2 week competition stimulus period with an impressive 100m in 11.44 (1.7w) at Blacktown in Sydney.

“It was a long day after getting up at 615am and driving up from Canberra and then running at 11am” Breen explained. “I actually didn’t feel super quick today after so many races recently, the early start and 3 hour travel on the day so I know there is improvement to be had from the run.”

“I will now get back into a training block to fit around the Brisbane and Adelaide meets in January” said Breen when asked what was coming up. She will compete in a 4 x 100m relay as well as an individual 100m in Brisbane and then do the 100m and 200m in Adelaide.

“I am only 0.15 off the ‘A’ standard for the Olympics with that run so that gives me great confidence that I can get under 11.29seconds during the domestic season and be selected for the 100m in London.”

In other squad results at Blacktown Ollie Wurm ran 54.67 in the 400m Hurdles. When asked about the race Wurm said “It wasn’t that pretty but it was just good to get one under the belt.” Technically he made a few errors which shows great room for improvement and he is sure to improve on his personal best in the next few months.

Chloe Jamieson (62.06) and Rachael Carnegie (67.48) also ran in the 400m Hurdles. It was Chloe’s first race since World Youth and Rachael’s first completed 400m Hurdles race in a couple of years. Both will improve massively from this competition.

Daniel Batman (10.86) and Brandan Galic (11.06) with a 0.5w rounded out the results for the MattyB DEPT. Both are on the comeback trail and will continue their rapid improvements in the coming weeks.

Very proud of you @nick_donaldson. You have taken on the challenging 400m journey with excitement and a willingness to have a crack. 46.76PB and the honour of being on the podium with @stevesolomon10 at NSW CHAMP yesterday is a moment to cherish and such a well deserved result
Emjay joined in with @jakepennny and @eddie.nketia for a block start today.