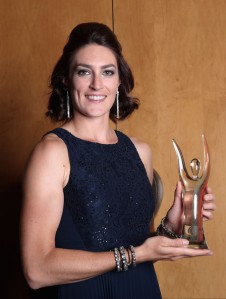 The MattyB DEPT. would like to congratulate and proudly recognise the recent award Lauren Wells received at the Athletics Australia awards night.

Lauren was awarded “The Flame” athlete of the year which is a reward for her passion to the sport, supportive nature to all her team members and outstanding consistency and involvement in the national senior team for multiple years.
After making her first senior team at age 17 for the 2006 Commonwealth Games, Lauren has not missed a national team for the past 5 years which includes two more Commonwealth Games, 2 x World Championships and the 2012 Olympic Games team.
Lauren has also claimed 7 national titles during her career and it focused on a big 2015 before the focus again shifts towards the Olympic Games in 2016.
She is a fantastic role model for the sport and we are proud to have Lauren as a member of the MattyB DEPT. as both a senior elite athlete and coach of the junior and mini FIT4FUN squads.
Summary
More information on Lauren can be found at http://www.laurenwells.com.au